Small, linear species. male 3.10—3.20 mm., female 3.40—3.60 mm (Nielson, 1968)General color light tan, immaculate. Crown, pronotum, and scutellum light tan; elytra light tan, hyaline.(Nielson, 1968)Pygofer in lateral aspect about 1½ times as long as wide, caudoventral margin produced posteriorly to small lobe, small spine arising from apex of caudoventral margin, projecting dorsad; aedeagus in ventral aspect with pair of terminal semicircular processes; gonopore terminal on apex of each process; style in dorsal aspect with apices broad and curved laterally; female seventh sternum in ventral aspect with medium excavation on caudal margin. (Nielson, 1968)This species is similar to opacipennis in general habitus and genital characteristics. It is most easily separated by the male plates, which together are truncate apically. Further characterization of the genitalia of tenellus was presented by Oman in (1948) and Young and Frazier (1954). (Nielson 1968)

The biology of this species is well known. Since reports on the subject are voluminous, no attempt will be made here to include them all. Some of the most notable contributions were made by Ball in 1907,1907,1909 and 1917 (24, 25, 27, 29), Stahl and Carsner in 1918 and 1923 (749, 750), Stahl in 1920 (748), Severin in 1919,1921,1930 and 1931 (684, 685, 688, 689), Carter in 1930 (123), Knowlton in 1932 (418), Cook in 1935 and 1941 (145, 146), Hills in 1937 (369), Fox in 1938 (272), Lawson and Piemeisel in 1943 (439), Romney in 1943 (648), Harries and Douglass in 1948 (333), and Lawson et al. (438). This species inhabits the arid regions of the world as evidenced by studies on its ecology and geographical distribution. The earliest studies on its life history were presented by Ball (24) in 1907 who indicated that the beet leafhopper was a 'single-brooded species.” However, subsequent investigators have shown evidence that it has more than one generation a year. Stahl (748) in 1920 reported one generation a year on sugarbeets in Idaho and stated that a probable second generation occurred on wild hosts. Severin in 1921 and 1922 (685, 686) reared two broods in the field at Berkeley, Calif., and Knowlton (418) reported two broods in most of Utah. A detailed study by Severin in 1930 (688) showed that two complete generations occured in the fog belt of California and three generations were evident in the San Joaquin Valley. In 1937 Hills (369) reported three generations in the central Columbia River region of Washington and Oregon. In Arizona as many as four generations were recorded by Romney (648), two occurring in the desert breeding areas and two in the cultivated regions.The length of development of the beet leafhopper varied with season, year, and locality. In 1907, Ball (24) found that the egg stage varied from 13 to 15 days and nymphal stage from 16 to 22 days in Utah. In California, Severin in 1930 (688) reported variations in the egg stage from 11 to 55 days during February to October and in the nymphal stage from 23 to 37 days during April to October. Average egg-laying capacity varied from 60 (Ball 1907) [24] to 350 (Severin 1930) [688]. A study on the effect of temperature and humidity on development, mortality, preoviposition, oviposition, longevity, and mortality of the leafhopper was reported by Harries and Douglass in 1948 (333). The average length of the egg stage varied from 5.5 days at l00° F. to 43.8 days at 60°. The nymphal stage increased from 13.0 days at 95° to 75.4 days at 65°. Minimum effective temperature was between 55° and 50°. -In most areas of its range the leafhopper overwintered as fertilized females. The spring brood generally occurred in May, the second in late June and - early July, and the third in late August. The insect disseminated for long distances in the spring and early summer to cultivated areas following host-plant depletion. Some of the principal breeding areas in the Western United States were southern Arizona, southwestern and western Texas, the eastern foothills of the Pacific coast range on the west side of the San Joaquin Valley in California, and the central Columbia River region in Washington and Oregon.Numerous host plants have been recorded for this species. The primary spring hosts were alfilaria (Erodium cicutarium (L.) L’Her.), tumblemustard (Norta altissima Britton), green tansy-mustard (Descurainia longipedicellata 0. E. Schulz.), flixweed (D. sophia (L.) Webb), and two mustards (Cheirinia repanda Link and Malcolmia africana (L.) R. Br.). Primary summer hosts included Russian-thistle (Salsola pestifer A. Nels.), bract-scale (Atriplex bracteosa Wats.), fogweed (A. expansa (D. & H. S. Wats.), and sugarbeets. Primary overwintering hosts were peppergrass (Lepidium nitidum Nutt. and L. latipes Hook.), desert plantain (Plantago insularis Eastw. and P. erecta Morris), and alfilaria. Numerous other plants have been recorded as breeding and feeding hosts.There is good evidence that the species was introduced into North America from the Old World. - Closely related species occur in the Mediterranean region and studies have revealed the presence of tenellus in northern Africa (Oman 1948 [587]; Frazier 1953 [274]; Young and Frazier 1954 [883]). -Oman (personal correspondence) has long believed that the species was introduced from the Old World, probably through the early Spanish explorers on infested plants that were carried on board ship. Additional evidence supporting the Mediterranean as the original home was found in 1955 when Freitag et al. (288) successfully obtained fertile progeny after crossbreeding populations from Morocco with populations from California. (Nielson, 1968)

This species is widely distributed in western North America and northern Africa, with a limited range in southern Africa. Its occurrence in the Western United States is well documented and it has been reported as far east as Kansas and occasionally has been taken from the southern tip of Florida. Caldwell and Martorell (1952) reported it from Puerto Rico. As far as I have been able to determine, it has never been reported from Canada. Young and Frazier (1954) reported it from numerous localities in northern Africa; viz, Egypt, Tripolitania, Tunisia, Algeria, Anglo-Egyptian Sudan, and a few localities in the Union of South Africa. (Nielson, 1968)

This species is a vector of curly top virus and sowbane mosaic virus. It was the first reported leafhopper vector of a plant virus in North America. Ball in 1907 and 1909 (24, 27) was first to report the association of the beet leafhopper with 'curly leaf” disease of sugarbeets, but Shaw in 1910 (716, 717) reported the first evidence of transmission of the virus by the insect. Transmission of the virus has since been confirmed by numerous investigators, and a long list of host plants susceptible to the disease has been recorded.In 1910, Shaw (716) demonstrated transmission with single leafhoppers feeding for a short time on diseased sugarbeets. Smith and Boncquet in 1916 (745) and Boncquet and Hartung in 1915 (103) tested leafhoppers collected from wild plants and placed on healthy sugarbeet seedlings, which did not become infected. However, part of the populations was fed on diseased plants from 3 to 7 days and transferred to healthy plants, which came down with - the disease. Smith and Boncquet in 1916 (745) confirmed these results and found that 3 hours’ feeding on diseased plants produced viruliferous leafhoppers. They reported an incubation period of 1 to 2 days before the leafhopper transmitted the causative organism.Ball in 1917 (29) was convinced that the disease was caused by the punctures of the leafhopper while feeding on plants. Transmission of the virus from naturally infective leafhoppers was demonstrated by Severin in 1919 (684), and he also reported an incubation period of a few hours in the insect before transmission was effected. Multiplication of the virus in the insect’s body was first suggested by Carsner and Stahl in 1924 (122) when they found that longer feeding periods on diseased plants produced more infective leafhoppers.Further studies on the mode of transmission by the beet leafhopper were reported by Severin 1931 (689). Percent transmission increased from 2.4 after feeding 20 minutes on test plants to 33.3 after feeding 4 hours. An increase in the number of leafhoppers per test gave an increase in percent transmission. Single insects were able to transmit after an incubation period of 7 hours. In 1938, Bennett and Wallace (67) reported a minimum incubation period of 4 hours. Fasting leafhoppers for short or very long periods prior to testing decreased transmission efficiency and percentage of transmission.There was no evidence of multiplication of the virus in the insect. In 1936, Freitag (281) presented negative evidence of multiplication of the virus in the insect by demonstrating that certain adults lost their ability to transmit later in adult life after receiving a 'low charge” of the Virus as young adults. Others retained ability to produce infections, but only at great intervals. Virus retention in some adults was as long as 151 to 180 days.Several strains of curly top virus have been reported that varied in their symptomatology from mild to severe (Giddings 1950 [312], Menzies and Giddings 1953 [516]; and Bennett 1955 [59] 1962 [60]). Some strains would not cross-protect, indicating that they may be different but closely related viruses.Transmission of the curly top virus from Turkey was reported in 1957 and 1958 by Bennett and Tanrisever (65, 66), and thus similar relationships of the virus were established between Turkey and North America. This is additional evidence that the origin of the virus and leafhopper is in the Mediterranean region.Transmission of sowbane mosaic virus was reported by Bennett and Costa in 1961 (63). After fasting the leafhoppers for 8 hours, four successive transfers at 2-hour intervals were obtained. Little infection was obtained after the fourth feeding period, indicating the leafhoppers lost their ability to transmit the virus; Sowbane plants were infected from contaminated mouth parts, since the leafhoppers were infected only for 8 hours following an initial 2-hour acquisition feeding period.(Nielson 1968)This species is the only known vector of curly top virus in North America and is one of the most important leafhopper vectors of plant viruses. Transmission of sowbane mosaic virus is of academic importance.(Nielson 1968) 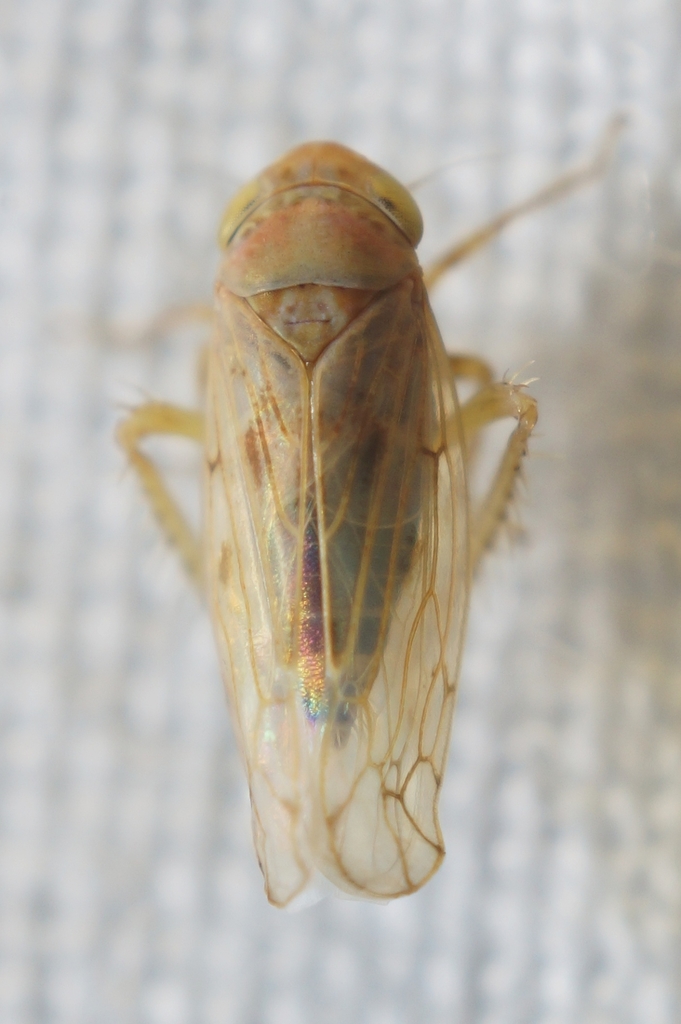 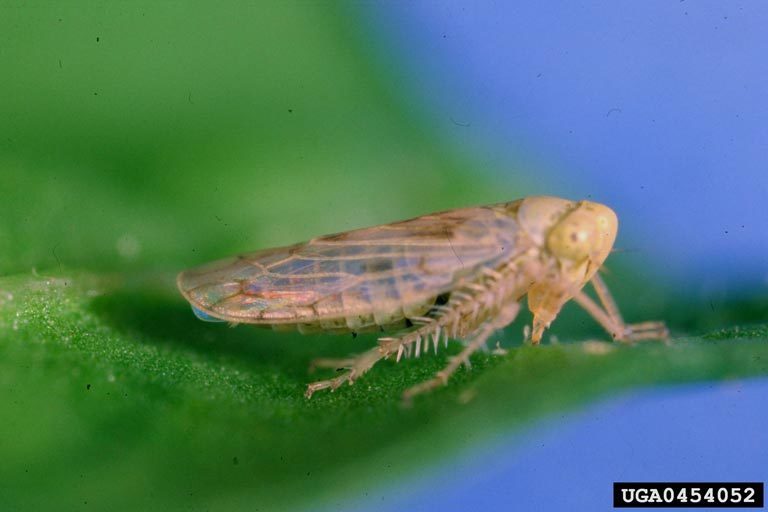