Sharp-nosed leafhopper , The sharp-nosed leafhopper
Published in: Say, T. (1830b) Descriptions of new North American hemipterous insects belonging to the first family of the section Homoptera of Latreille. (Continued). Journal of the Academy of Natural Sciences of Philadelphia 6, 299–314.

male 4.20—4.70 mm., female 4.80—5.30 mm. (Nielson, 1968)General colour brown. Crown with brown longitudinal striate markings; pronotum with brown reticulated markings; elytra with brown reticulations and occasional ivory spots.(Nielson, 1968)Pygofer in lateral aspect about 11/3 times as long as wide, caudodorsal margin produced posteriorly to subtruncate lobe; aedeagus in lateral aspect simple, tubelike, narrow, elongate; gonopore apical; paraphyses extremely long, narrow, crossing over about middle; style in dorsal aspect with apices narrowed, slightly curved laterally; female seventh sternum in ventral aspect with caudal margin broadly convex. (Nielson, 1968)This species is similar to delongi in genital characteristics and can be separated by the aedeagal paraphyses, which are crossed over once. There is considerable variation among the forms assigned to this species. Typical acutus occurs in the Eastern United States and Canada and has once-crossed aedeagal paraphyses whereas western forms from Washington, Oregon, and Utah usually have once-crossed but sometimes twice-crossed aedeagal paraphyses. The western forms are also darker and the crown is much more produced and pointed than in the eastern forms. Other closely related species in the Western United States, particularly delongi Young, graneticus (Ball), utahensis Hepner, canus Hepner, dubius (Van Duzee), and oregonensis (Baker), (Nielson 1968)

The biology of this species is well known. Its principal host in the Western United States is alfalfa (Menzies 1946 [514 ; Wolfe 1955 [866]; Glover and McAllister 1960 [317]). I have collected numerous specimens from alfalfa in Utah, Washington, and Oregon. Wolfe in 1955, (866) reported alfalfa as the common host in Washington. He also found nymphs and adults feeding on sticky laurel (Ceanothus velutinus Dougl. ex Hook.) at high elevations. Additional food plants listed were spirea (Spiraea), thistle (Cirsium), balsam poplar (Populus balsamifera L.), wild rose, willow, sumac (Rhus), Oregon grape (Berberis sp.), peach, and sweet cherry. In 1939, Osborn (605) reported it in Ohio as a general feeder on different kinds of grasses and weeds without being restricted to any particular host. In New York, Palmiter et al. in 1957 (617) found nymphs feeding on alfalfa (Medicago), trefoil (Lotus), red clover (Trifolium), sweetclover (Melilotus), sheep sorrel (Rumex acetosella L.), and chickweed (Stellaria). Numerous adults were also collected on sticky-board traps that had been placed in orchards of peach, apple, plum, pear, sweet cherry, and wild plantings of chokecherry, wild black cherry, and wild plum.The earliest studies on its life history were made by Osborn in 1939 (605) in Ohio. He found nymphs first appearing in late May that matured by late June. Adults began to appear in the middle of June and were present until the middle of July, at which time nymphs of the second generation began to appear. Nymphs matured in August and adults laid eggs in October. Two generations were evident and the insect overwintered in the egg stage.Observations made by Wolfe in 1955 (866) in Washington were Very similar, i.e., nymphs and adults were observed during the same period, two generations occurred a year, and the insect overwintered in the egg stage.In New York, Palmiter et al. in 1957 (617) reported the most complete study of its life history. The leafhopper was reared in the laboratory starting with egg-infested leaves of peach, chokecherry, and wild black cherry. Both sweetclover and chokecherry seedlings were used as food for nymphs as they hatched from the eggs. At 70° to 75° F. the eggs hatched in 11 to 14 days. After hatching, the first, second, third, fourth, and fifth molts occurred on the 2d, 9th, 11th, 15th, and 23d days, respectively. The insect overwintered in the egg stage in fallen leaves of stone fruit trees. Eggs laid by the second brood in October did not hatch in the laboratory until the following spring, suggesting that the eggs were in diapause. There were two generations a year and field populations were highest in June-July and September-October.In 1962, Chiykowski (137) reared this species in Canada on Ladino clover from eggs that hatched in 15 days. The average length of the first instar was 5.8 days, second instar 5.4 days, third instar 5 days, fourth instar 5.2 days, and fifth instar 6.4 days. The period from egg to adult averaged 27.8 days and adult longevity was at least 100 days. The species was also able to breed on strawberry plants. (Nielson, 1968) 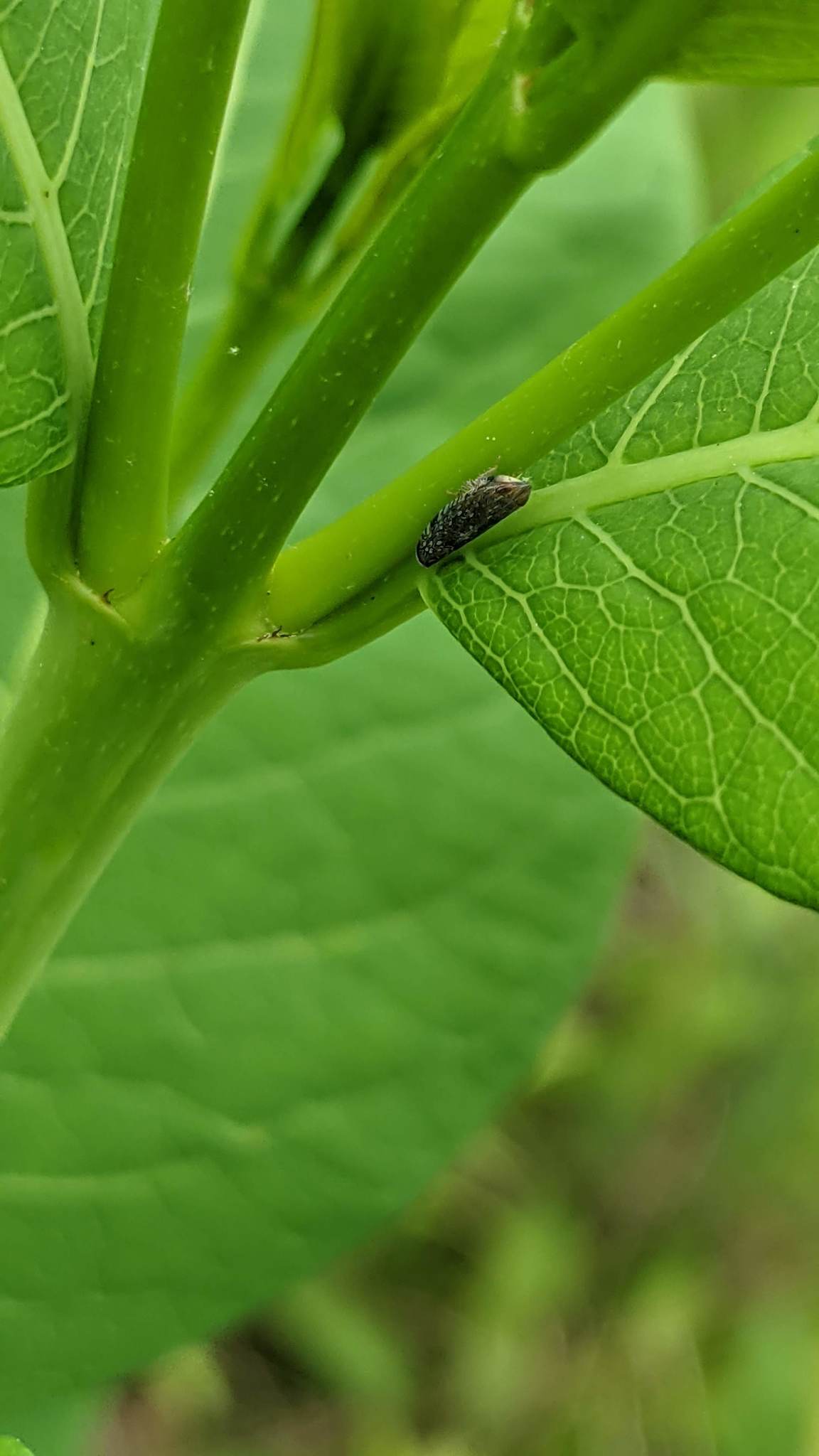 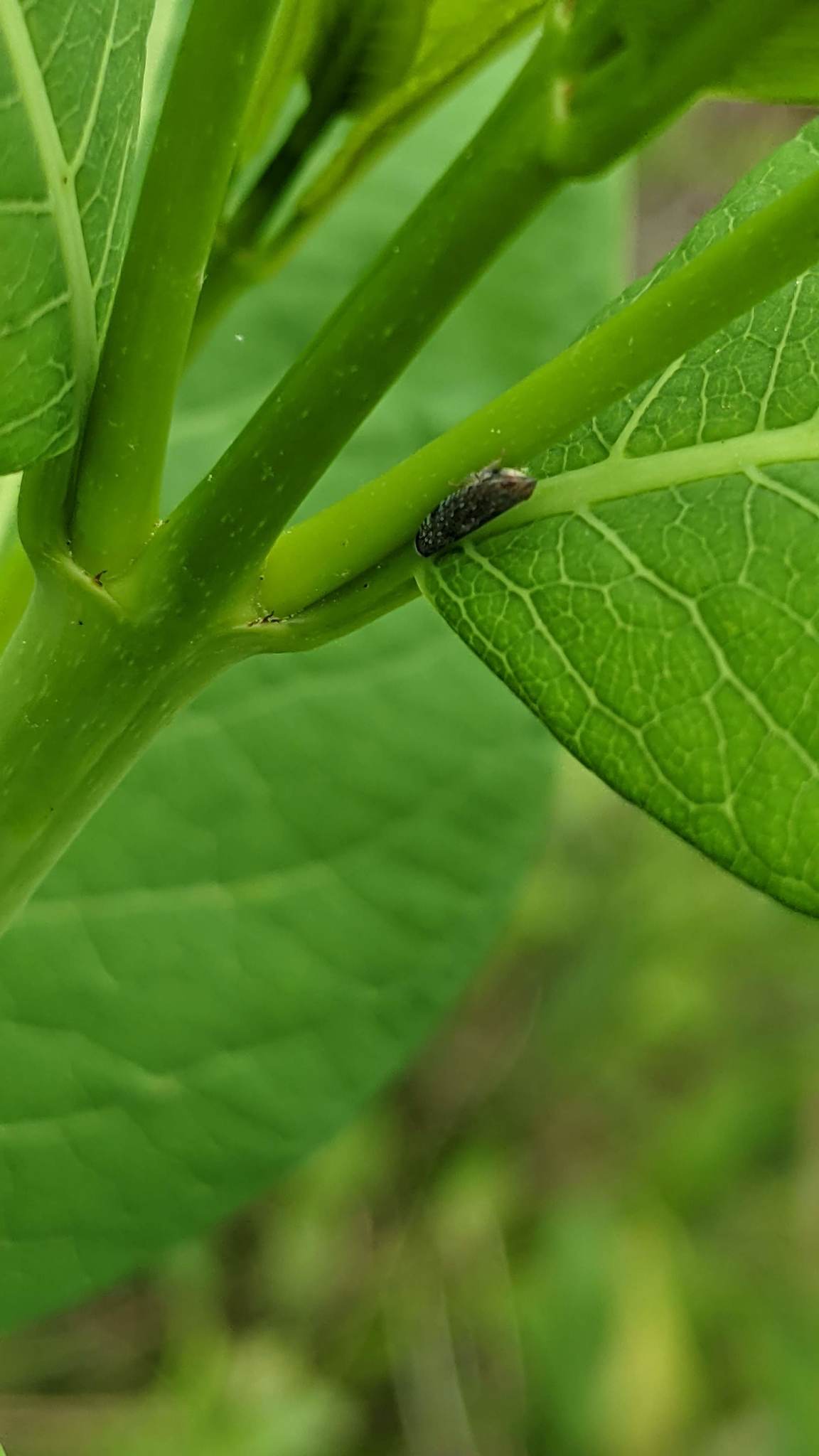 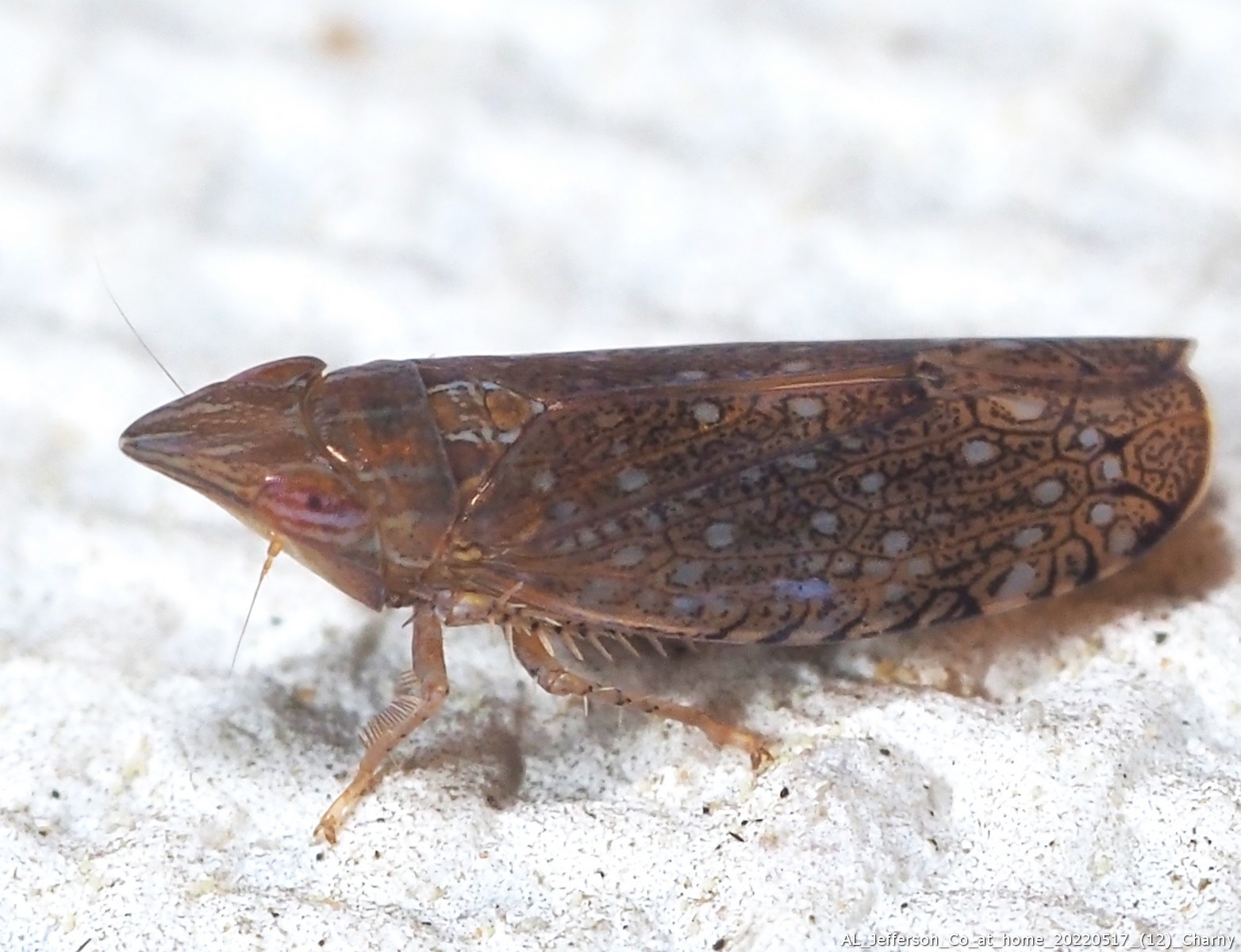 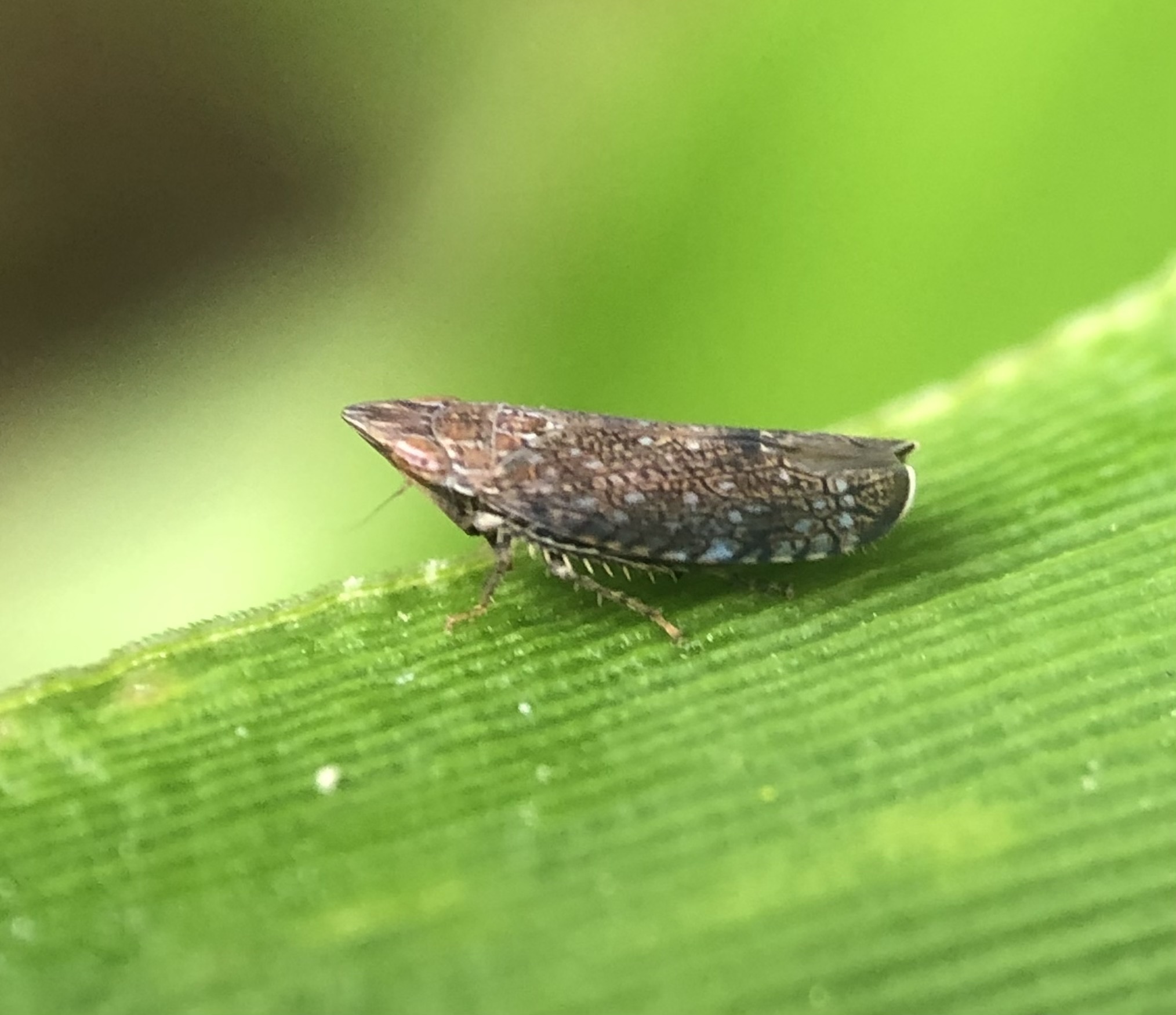 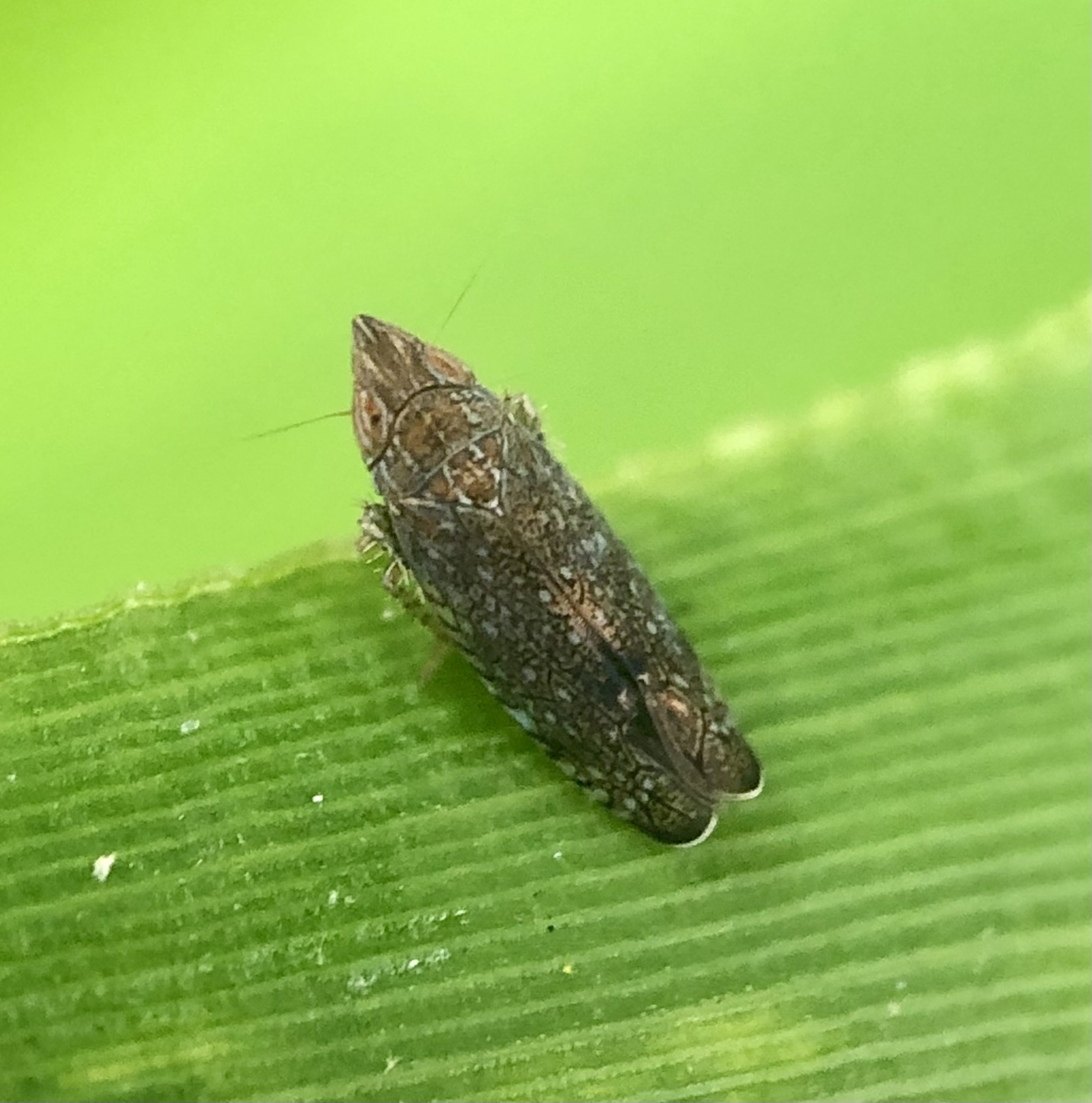 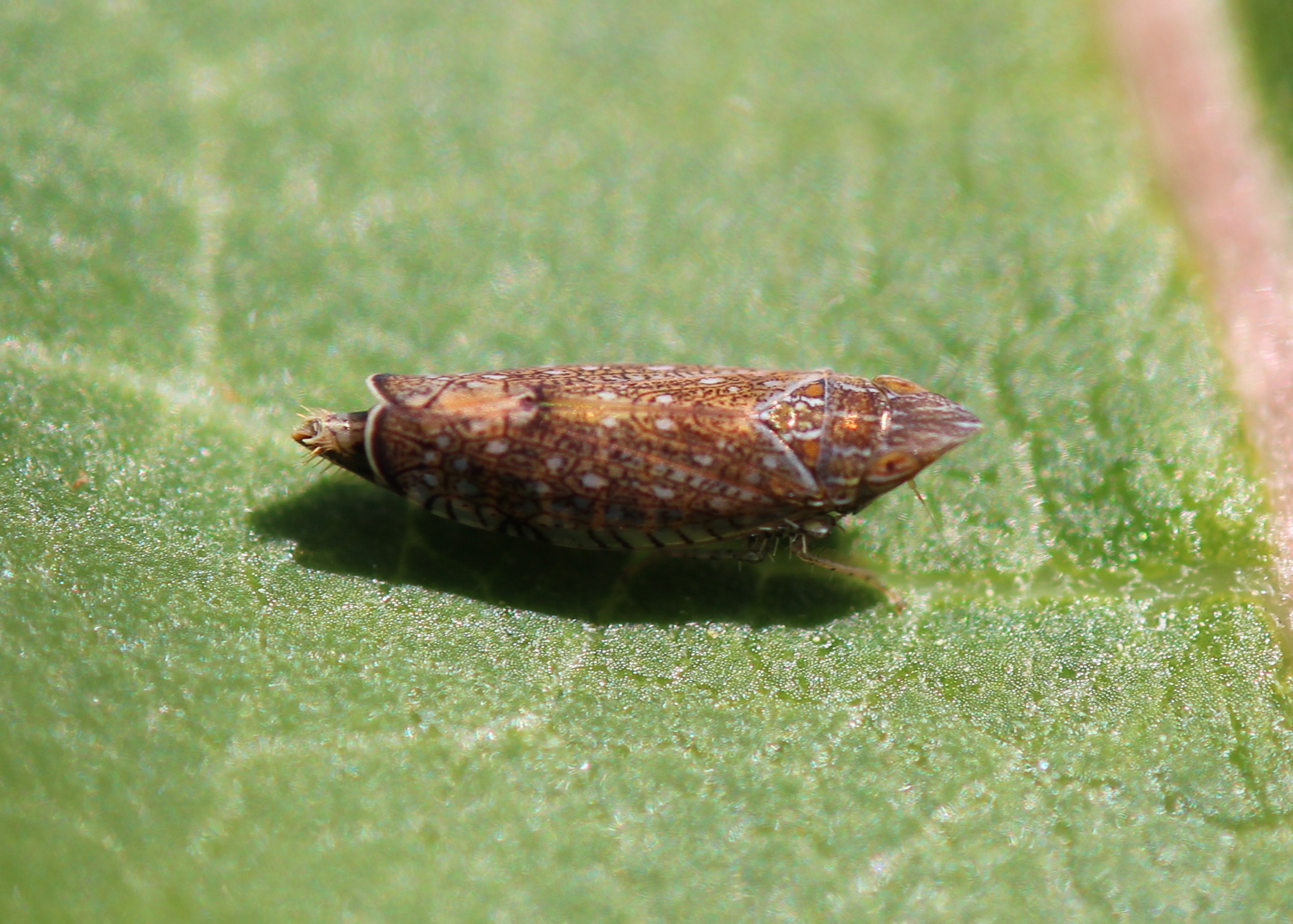 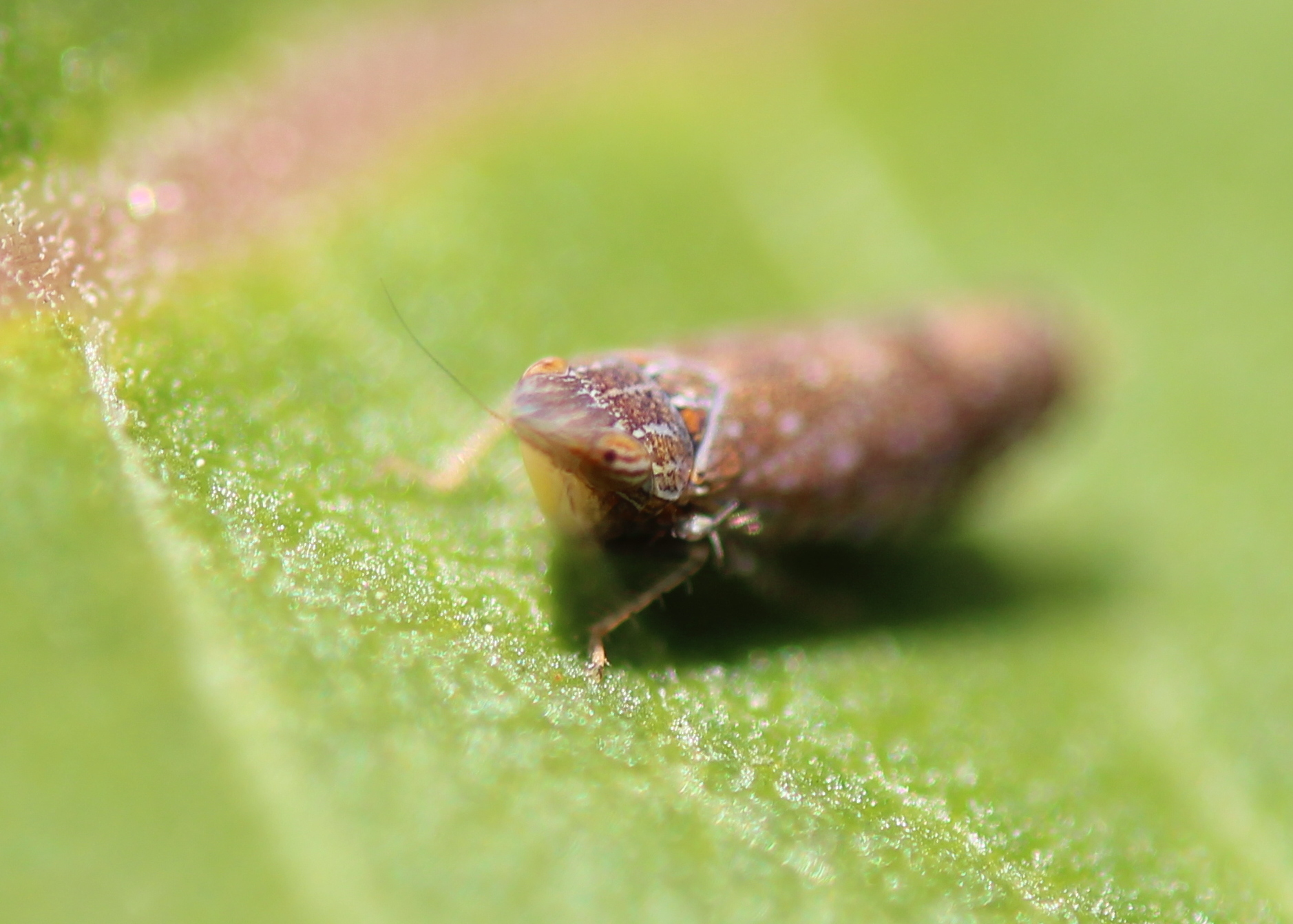 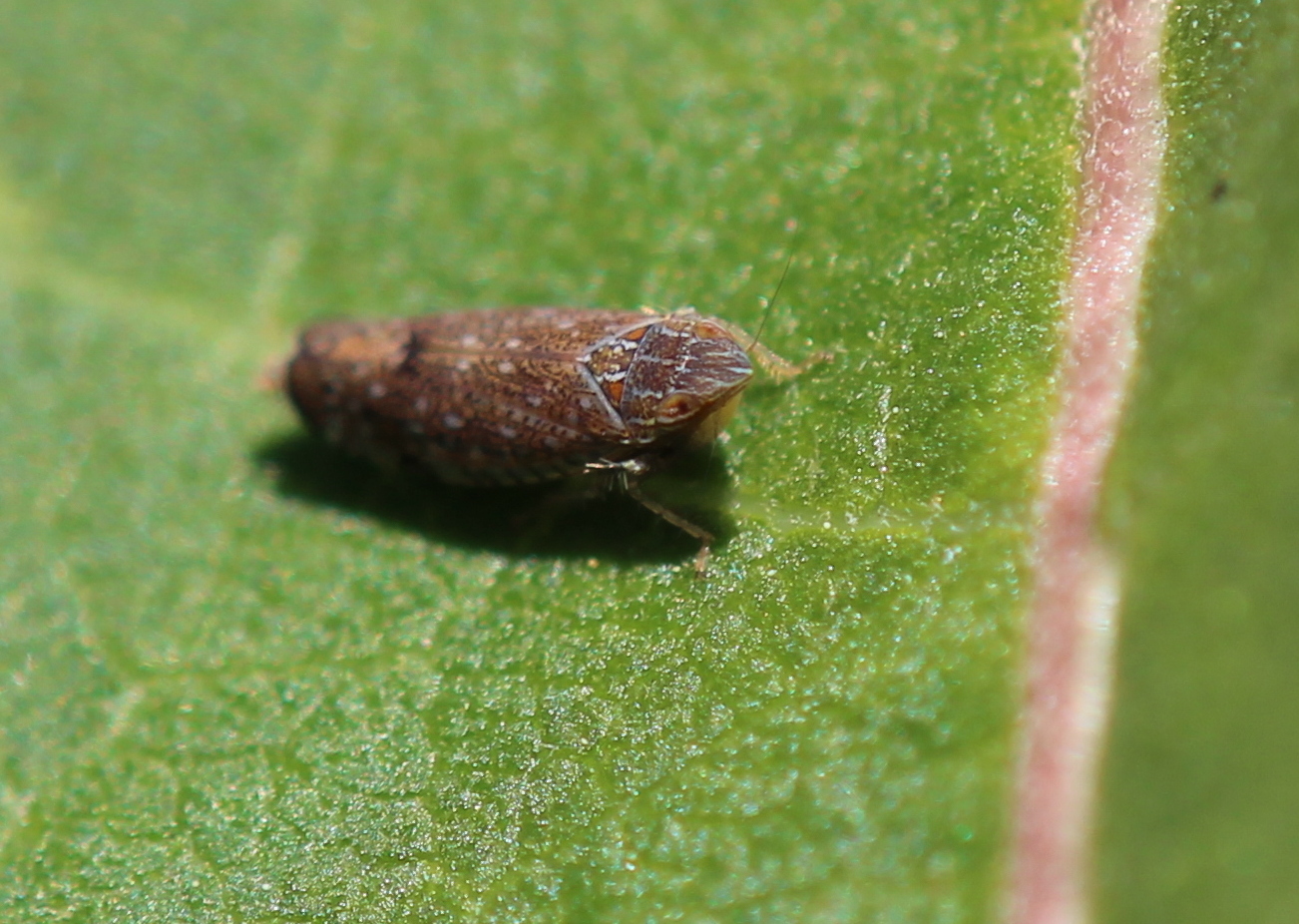 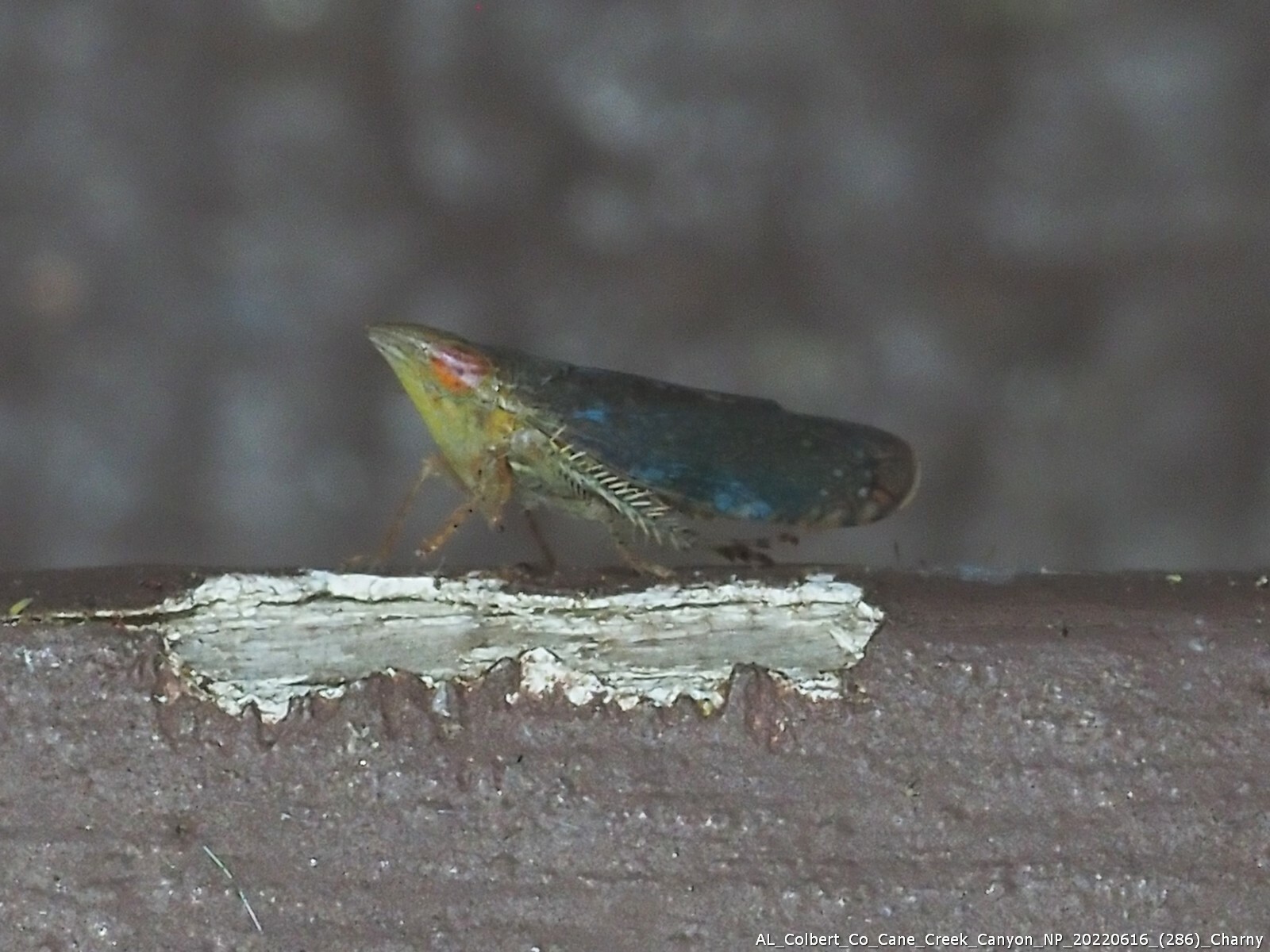 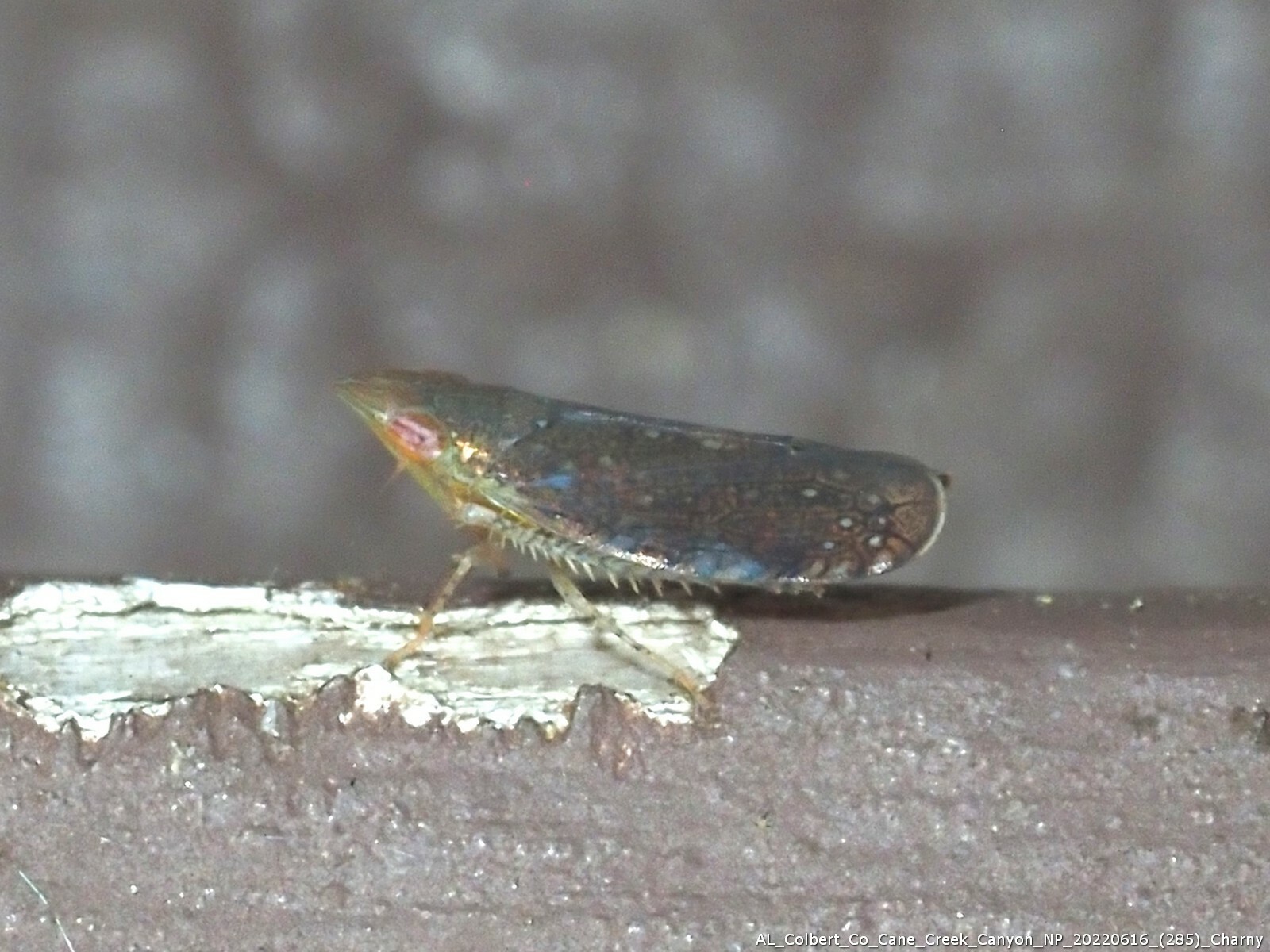 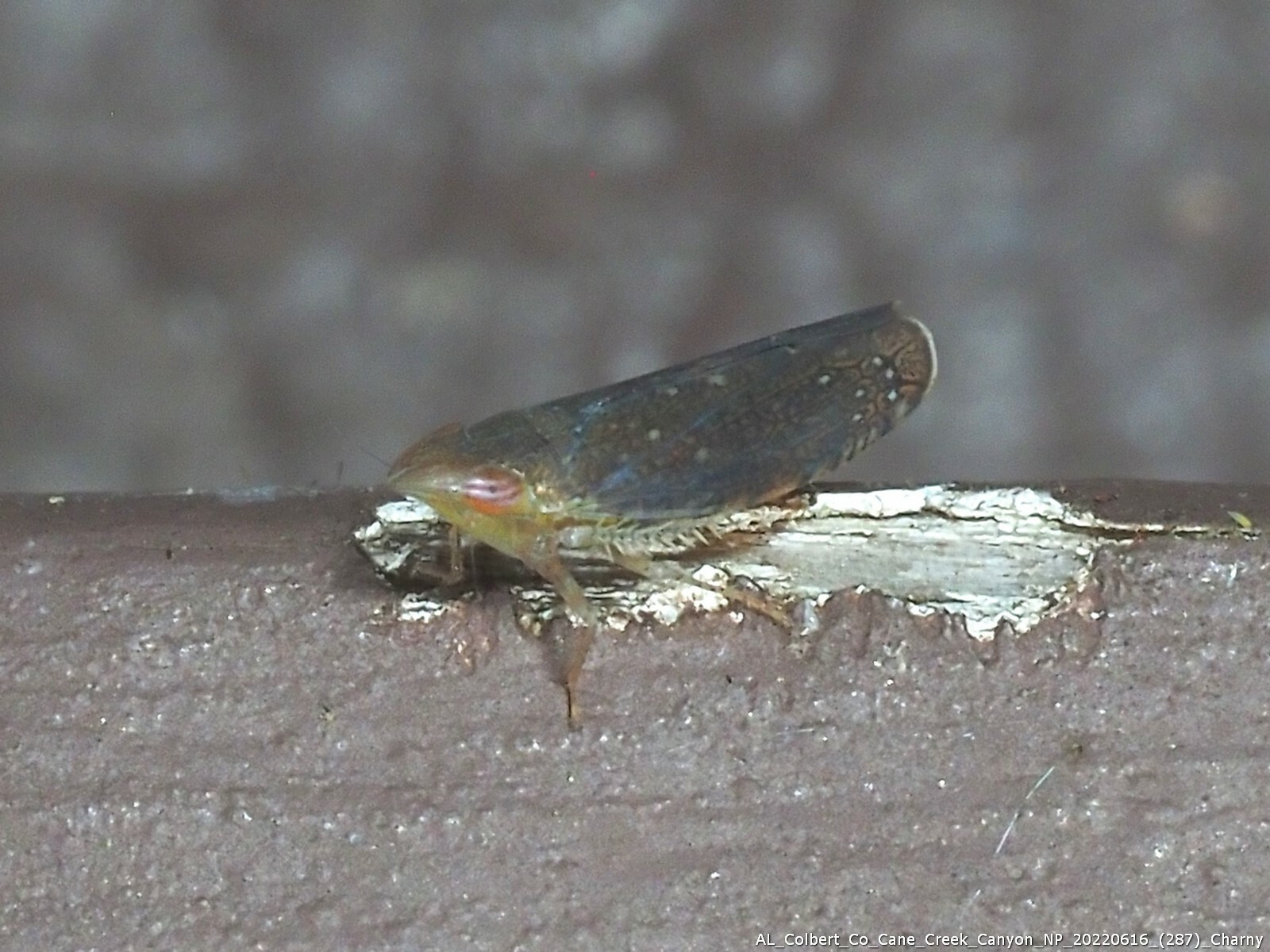 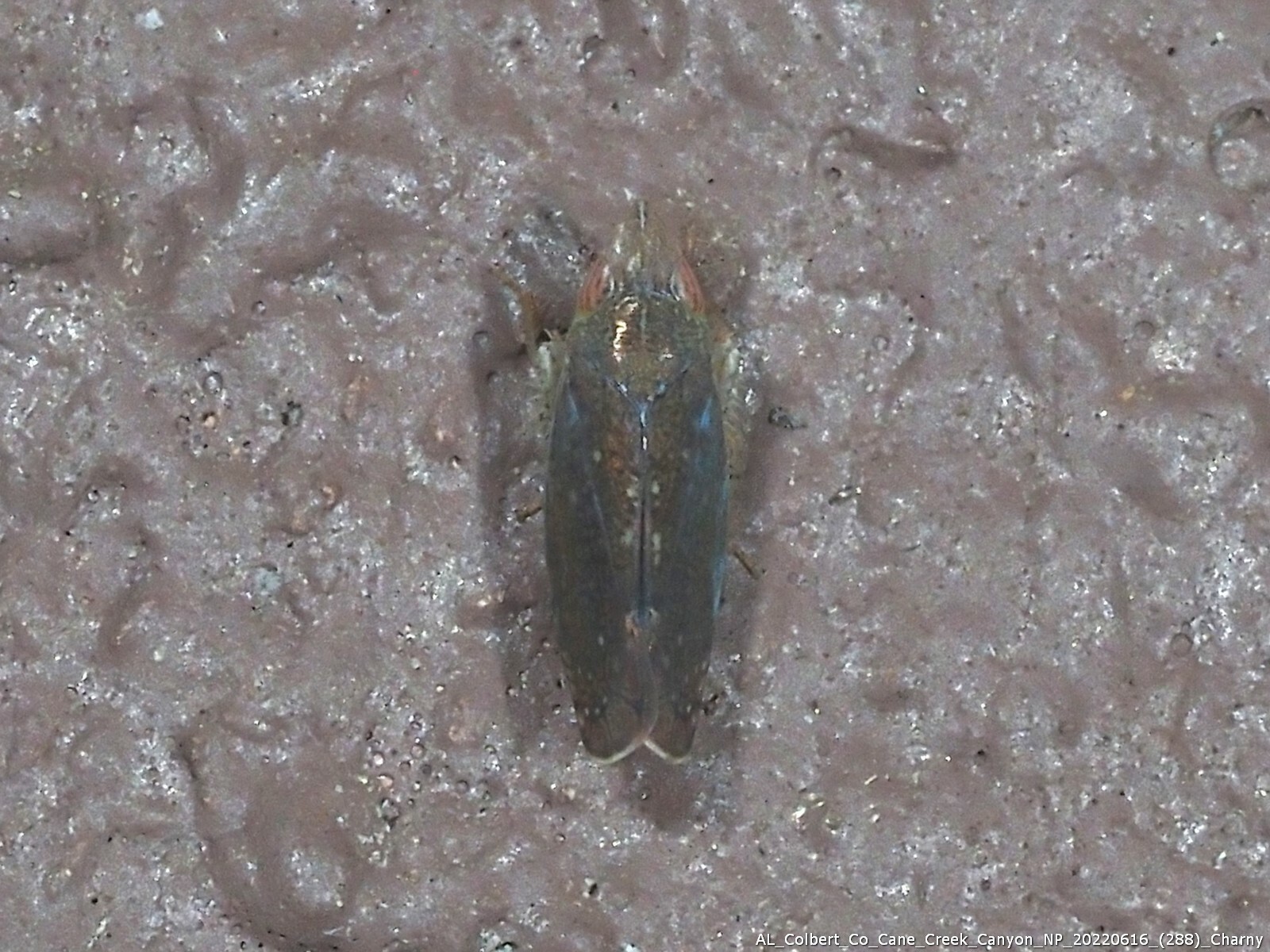 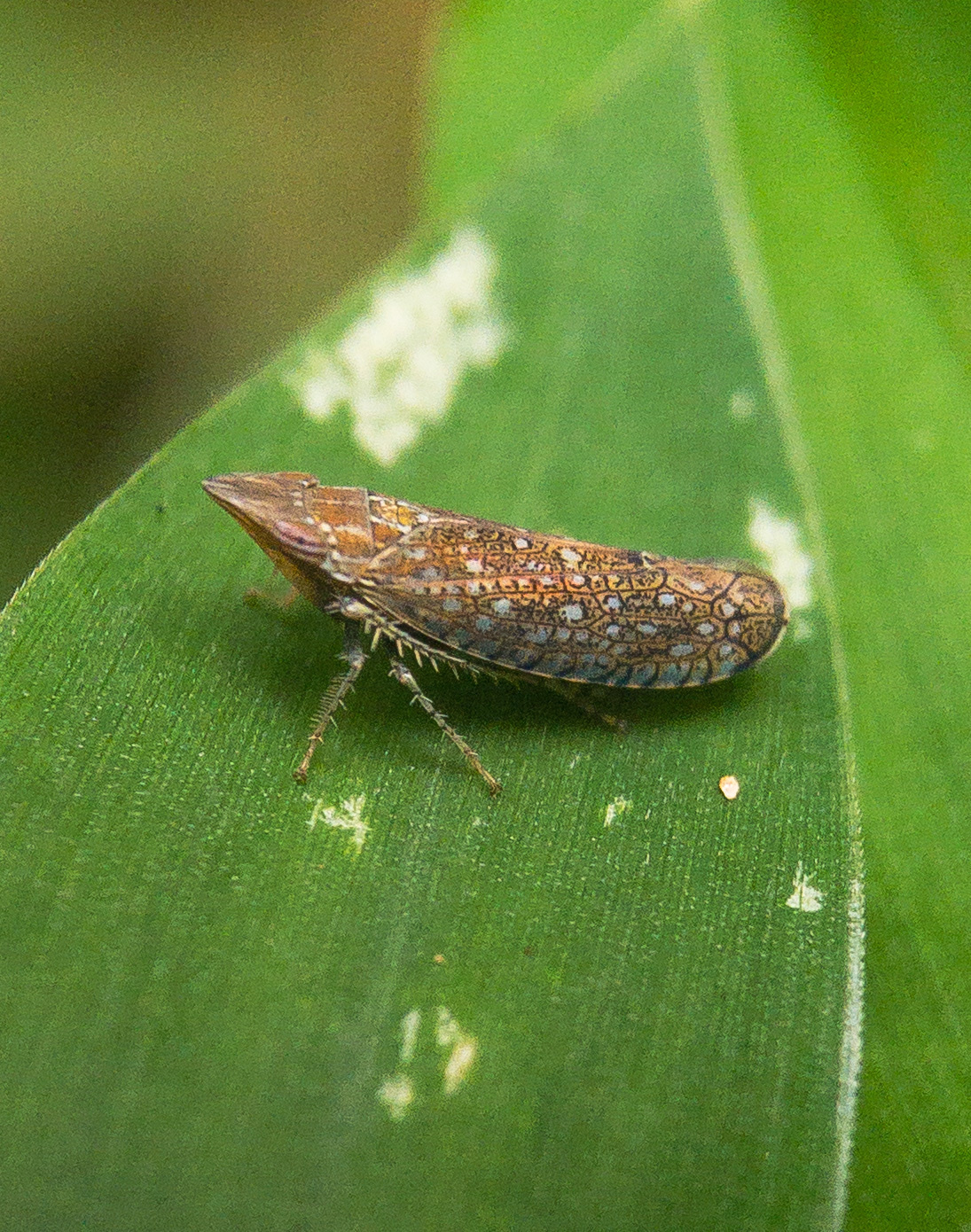 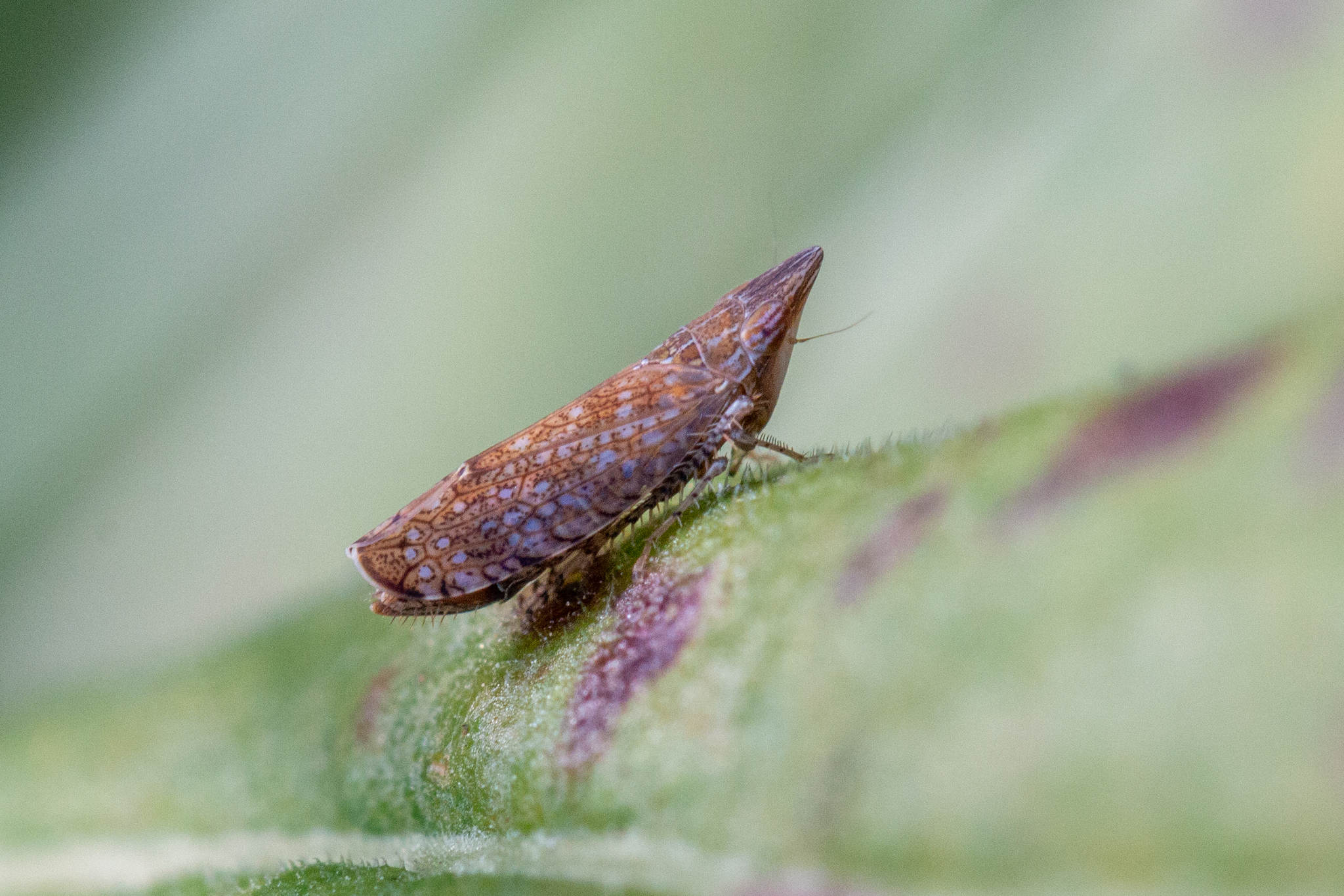 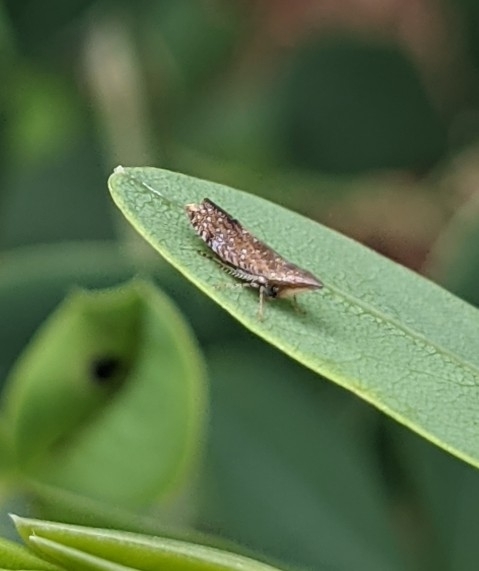 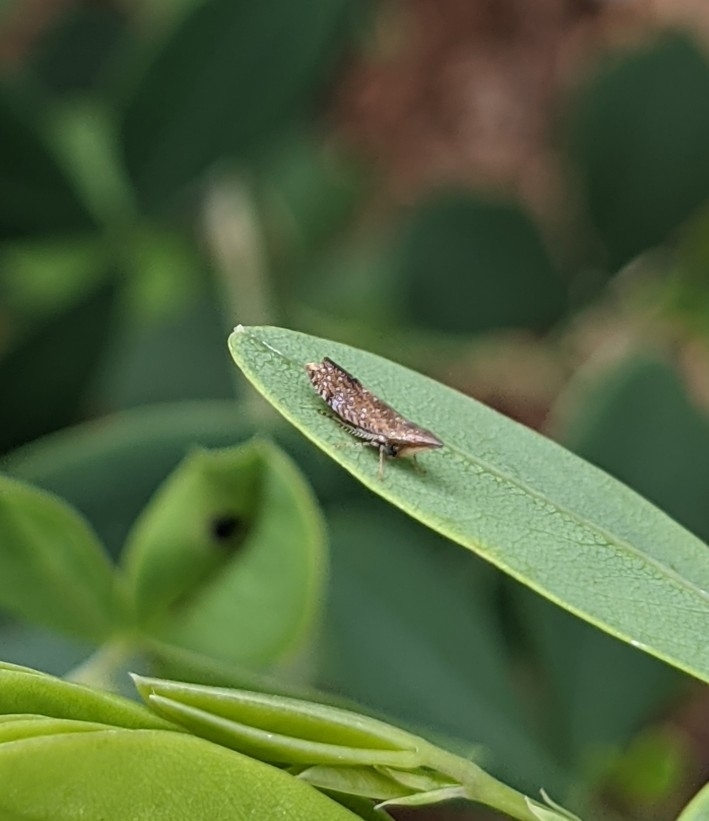 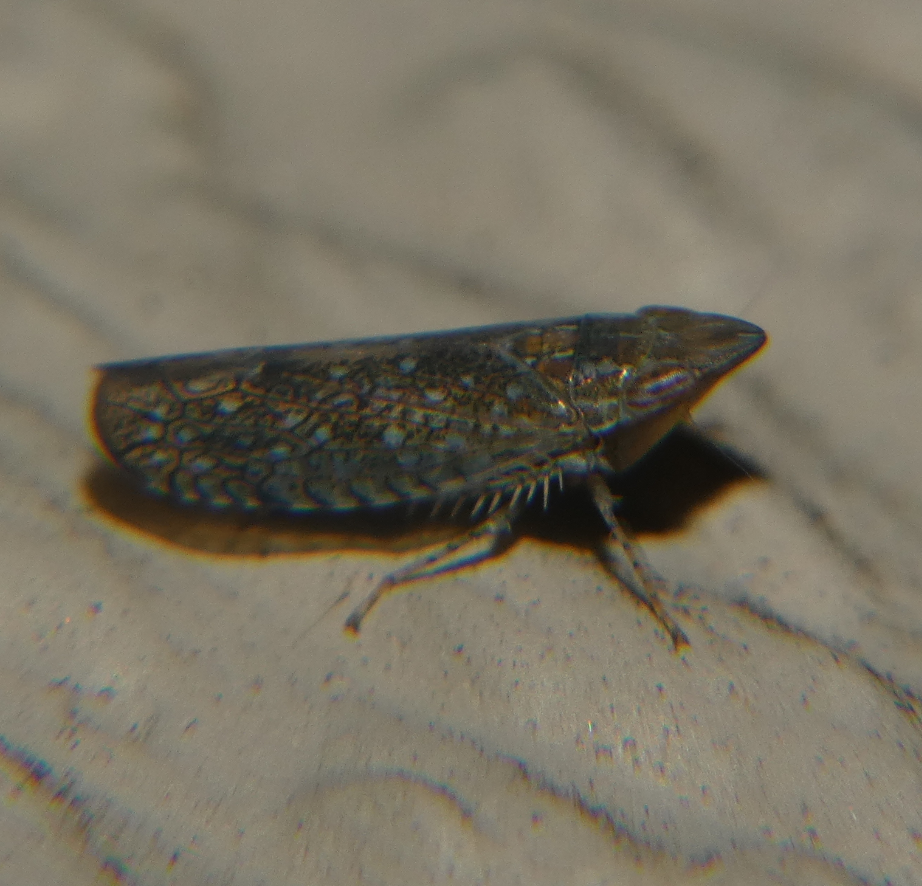 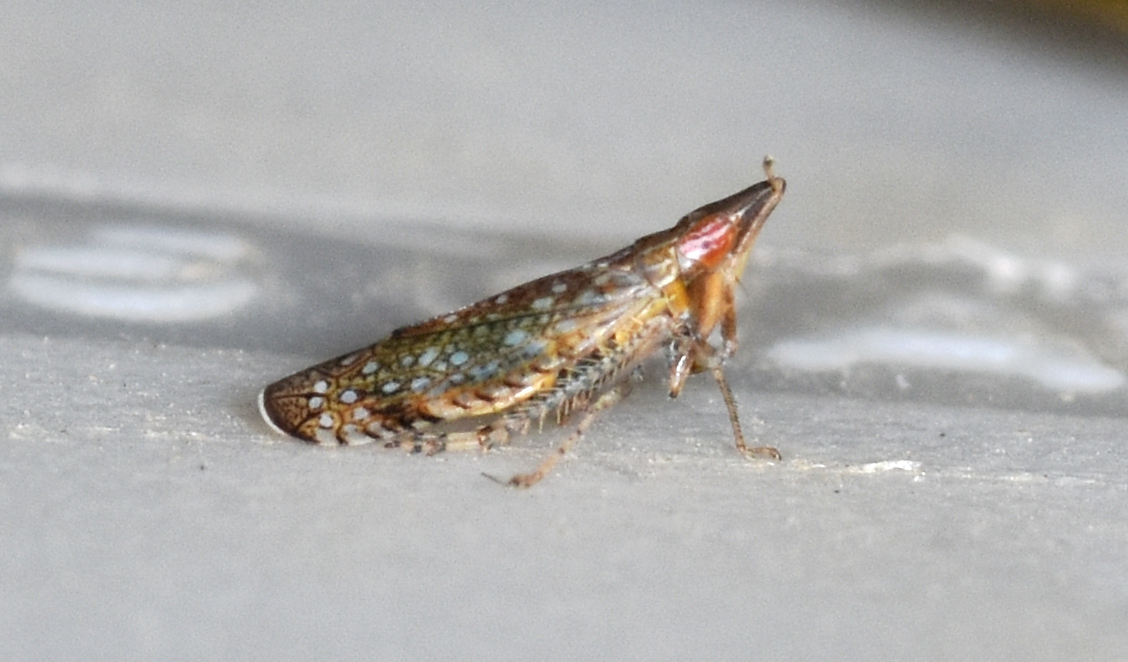 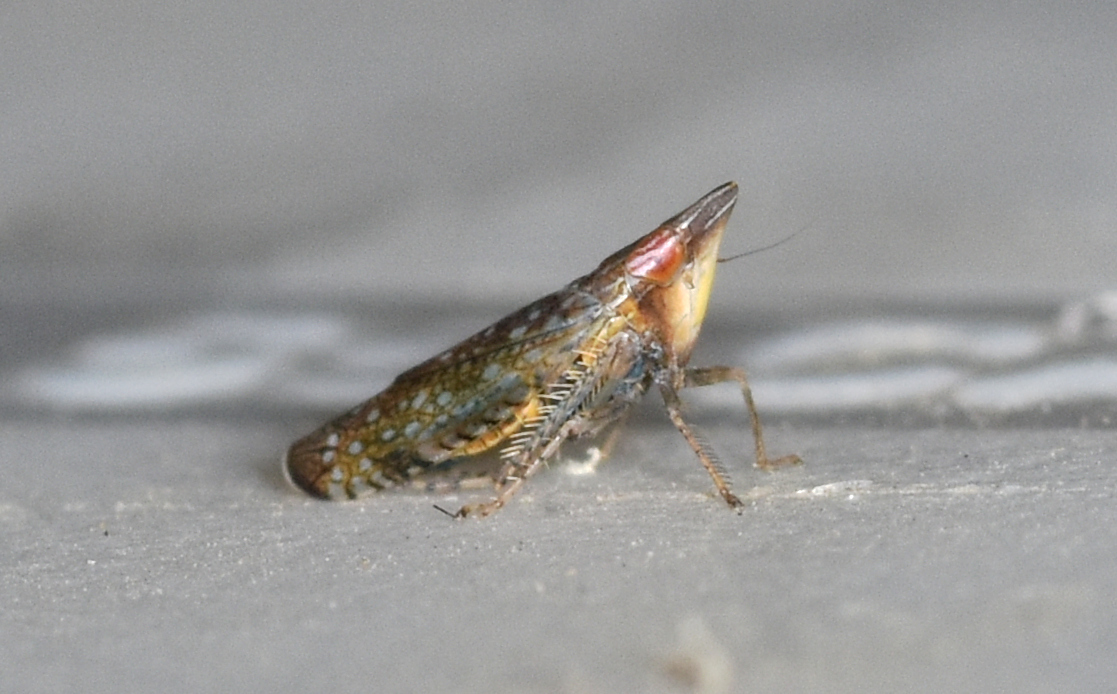 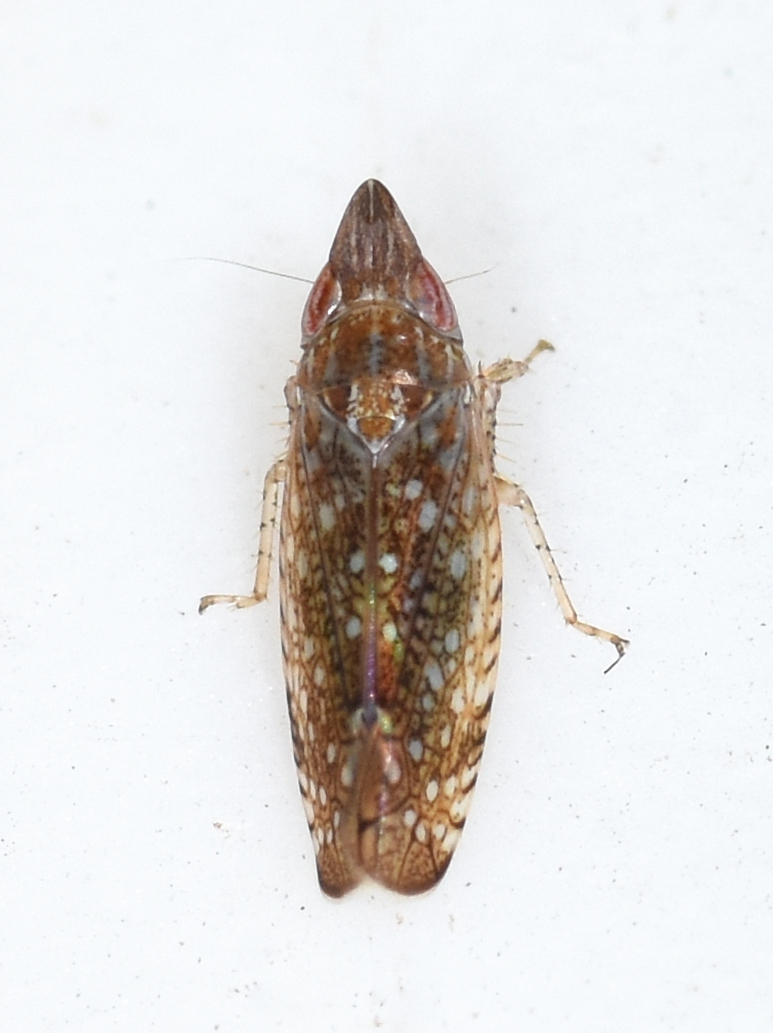 This species is widely distributed in the United States and Canada except along the Pacific coast of North America and the Southwestern United States. In 1952, Beirne (55) reported it from the Provinces of Nova Scotia, Prince Edward Island, New Brunswick, Quebec, Ontario, Manitoba, Saskatchewan, Alberta, and British Columbia. It has been identified from western Washington and western Oregon (Wolfe 1955 [866]), Utah (Glover and McAllister 1960 [317]), and many Central and Eastern States (Young, 1950 [876]). (Nielson, 1968)

This species is a vector of six viruses:Alfalfa witches’ broom virus in Washington and Utah, western X-disease virus of peach and cherry, eastern X-disease virus of peach and cherry, little cherry virus in British Columbia, clover phyllody virus in eastern Canada, and the western strain of North American aster yellows virus in eastern Canada.The first indication that this species transmitted a virus was reported by Menzies (513) in 1944, when he obtained transmission of alfalfa witches’ broom virus in Washington. The vector species was identified as 'Platymoideus acutus Say.”Later Menzies (514) gave detailed reports of transmission experiments, which confirm earlier , in 1946 investigations. After an acquisition feeding period of 10 days on diseased plants and from 21 days to an indefinite period on test plants, the vector transmitted the virus to 11 of 19 plants. Menzies also demonstrated natural infectivity of the vector after obtaining 21-percent infection by collecting leafhoppers directly from field-infected plants and caging them on healthy test plants. However, after conducting surveys, he concluded that the species may not be an important natural vector and suggested that other leafhopper species may be involved. He based his conclusions on the lack of populations in areas where the disease was prevalent and in other areas where new infections appeared several months earlier than leafhopper populations.Additional tests were conducted on other legumes by Klostermeyer and Menzies in 1951 (416) using a vector under the name 'Scaphytopius (Cloanthanus) dubius (Van Duzee) .' The species was later identified as Scaphytopius acutus (Say) by Young in 1952 (878). A total of. 23 species or varieties of forage legumes were infected with the virus by means of this leafhopper. The virus was transmitted by previously noninfective insects after they fed 3 days on inoculum and 7 days on test plants, indicating a latent period of less than 10 days. The minimum incubation period in the plants was established as 74 days and the retention period of the virus in the vector varied from 9 to 13 days.In Utah in 1960, Glover and McAllister (317) obtained transmission of this virus with adults to 19 of 37 plants tested. The incubation period ranged from 55 to 100 days. There was no indication as to whether this period included both insect and plant, but judging from the results obtained by previous workers, it probably included both. Attempts to transmit the virus by nymphs were not successful.The first transmission of the western X-disease virus of peach was obtained by Anthon and Wolfe in 1951 (8) - Only one positive case of transmission from peach to peach in the field was effected. Confirmation was reported by Wolfe and Anthon in 1954 (867) by transmitting the virus from diseased sweet cherry to 5 of 10 peach seedlings. Also, 12 of 47 infections were obtained with 15 adults during serial transfers of individuals from infected sour cherry to healthy peach seedlings. Eight out of 15 insects became viruliferous after feeding on the inoculum for 35 days. The latent period was not more than 45 days in some cases and as long as 65 days in others. Nymphal acquisition of the virus was demonstrated by Wolfe in 1955 (864) in the laboratory. Only the fifth instar acquired the virus and transmitted it as an adult.Transmission of eastern X-virus of peach was first reported by Hildebrand in 1953 (364). He obtained three positive cases in two separate experiments. Leafhoppers were caged on diseased chokecherry for 6 to 12 days and transferred serially from one peach seedling for 6 days to another seedling for 4 days. Both test plants became diseased. Later the experiment was repeated and one positive case of transmission was obtained. Gilmer and McEwen in 1958 (315) confirmed transmission by allowing a 5-to 10-day acquisition feeding period on diseased chokecherry seedlings and a transmission feeding period of 25 days on healthy periwinkle (Vinca rosea L.) plants.Transmission of a virus causing little cherry in British Columbia was reported by Wilde (861) in 1960 . Only a single case was obtained after the insect fed on diseased sweet cherry and healthy test plants for an overall period of approximately 70 days. These studies have not been confirmed.Transmission of clover phyllody virus was reported for the first time by Chiykowski in 1962 (135). The species transmitted four isolates of clover phyllody virus to 15 of 21 Ladino clover, 1 of 1 red clover, and 10 of 13 periwinkle plants. Adults did not become infective when fed on diseased periwinkle plants nor did nymphs complete their development on this plant. The incubation period of the virus in the vector was between 32 and 35 days. The shortest acquisition feeding period was 7 days on infected clover plants.In 1963, Lee and Chiykowski (446) demonstrated mechanical transmission of this virus by injecting infective cell-free supernatants into the bodies of virus-free leafhoppers. After an incubation period of 42 to 49 days, the virus was transmitted to four out of four clover test plants.The western strain of North American aster yellows virus infecting celery was transmitted for the first time by this species (Chiykowski 1962 [137]). The Virus was transmitted from infected periwinkle and aster to healthy periwinkle, aster, and Ladino clover. Virus was acquired in 4 hours and transmitted during a 2-hour feeding period. The minimum incubation period of the virus in the vector varied between 21 and 26 days.(Nielson 1968)This species is considered a very important vector in view of its ability to transmit several plant viruses. Most of the viruses are considered distinct, which opens up a wide field of speculation on their relationships. Part of the answer may lie in the vector species itself, which consists of a complex of several forms. Whether or not these are geographical isolates capable of transmitting those viruses that themselves may be likewise restrictive is worthy of further intensive investigations.(Nielson 1968) 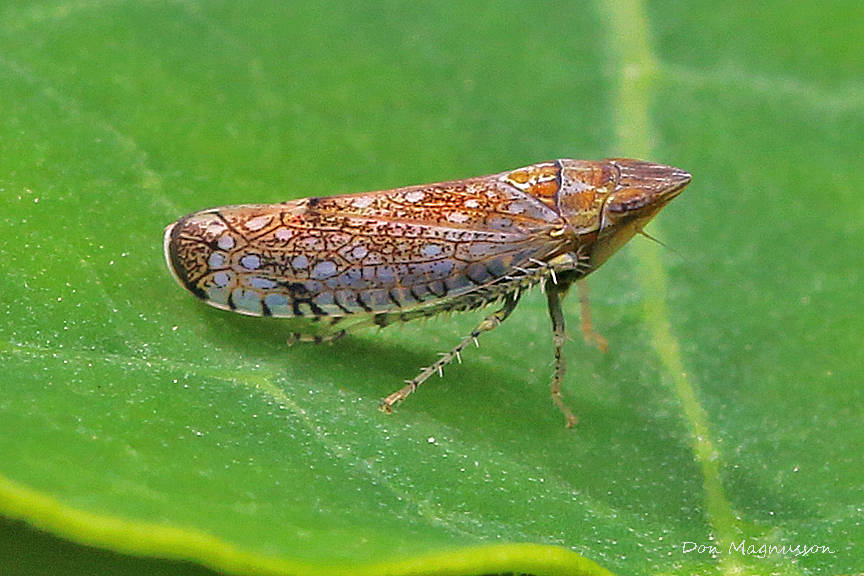 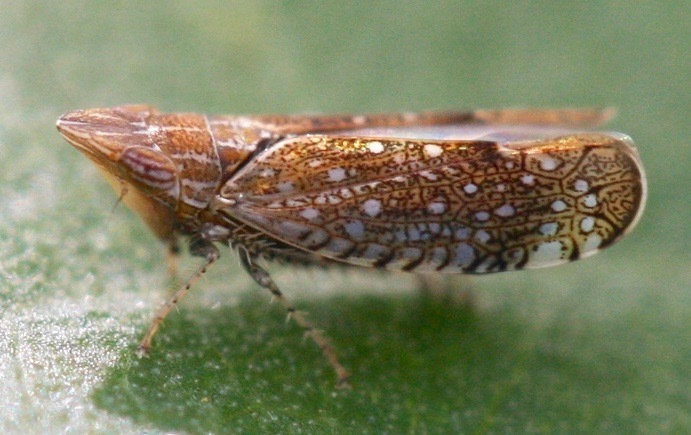 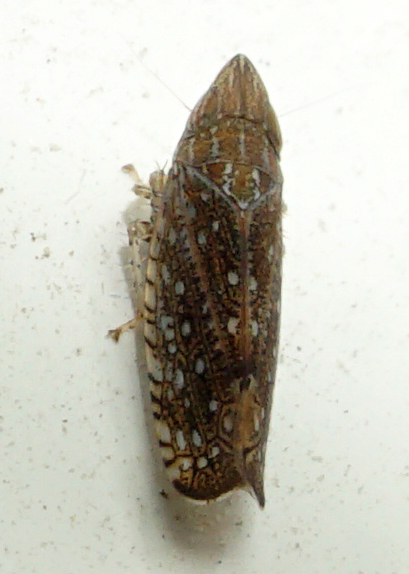